Yerevan is also known as the pink city, is the capital of the country Armenia. The city is famous for its architecture formed during the Soviet era and they still have it in present times. Most of the tourists are often attracted to Yerevan’s central places which have an ample number of locations to go to. 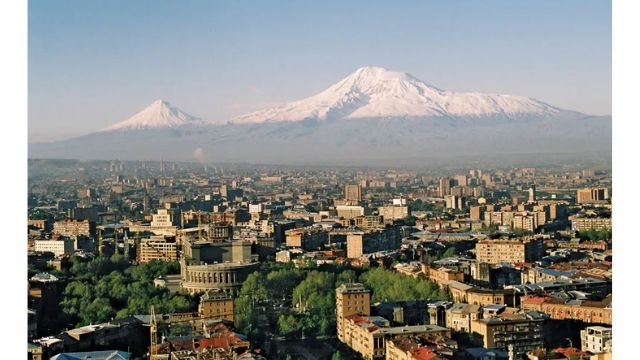 The population of the city consists of around 1 million people. The city and the country itself are very famous for their wines and cognac. Like when you arrive at the airport which is 12km away from the city, the first thing you’re going to notice is a huge wine bottle statue. Yes, you can say it is built to make it look like a symbol of their country and to tell tourists how much the native people love their drinks.

The core of the city is the Republic Square with musical fountains and colonnades government donors. This is where they have city celebrations and in the evenings it is a popular place to go to see the fountain show.

There are various restaurants in the city with a nice view. The city is really small and walkable from Republic Square. You can walk to Northern Avenue which is a pedestrian street that was opened in 2007. This new area has a lot of restaurants and shops.

It’s home to some upscale residential buildings, offices, coffee shops, and hotels. From here you can walk towards the Oprah theatres and magnificent building. There is a beautiful small park with an artificial small lake called Sevan Lake behind it. And the final destination on the walking tour will be the cascade.

The Yerevan Cascade is a giant stairway made of limestone with multiple levels adorned with fountains and sculptures. This is where you want to be if you want to have some fun in the evening. There are plenty of cafes and restaurants. People are chilling and just good vibes. You’ll really enjoy it.

Don’t get shocked if they charge you 10$ dollars for a glass of fresh pomegranate juice. Yes, Yerevan is a very affordable city but it also depends on the seasons.

Also: If you are into web series the trending Vagabond Season 2 is about to hit screens. So get your Netflix accounts ready and while traveling to places you can enjoy this series.

Time to do some exciting things. Let’s go

Yerevan Zip Lining – There is a new zipline in the city which is 870m long which goes under the bridge at the speed of 140kms an hour. Can you imagine how exciting it would be to see the view from above while doing this thrilling activity.

Victory Park – To get a good view of the city and take some pictures you must go to the victory park. If you are lucky enough you will be able to see Mount Ararat which was historically part of Armenia. It’s the highest mountain in the region. Now it is located in Turkey but clearly visible from Armenia.

Amusement Park – If you want to spend some fun time apart from exploring the city’s old culture and structures there is an amusement park in the city itself where you can relax and chill. It’s a joyful place where many tourists like to go because it’s something different from the other main attractions of the city.

The city is a great mixture of both old and new places to visit and grab some knowledge about. Has many activities to do. Food is good, people are polite, transportation is up to the mark like the city has a well-developed network of buses similar to other post-soviet countries. $35 to $40 can be the price of the room in a good hotel for a night’s stay. So do make sure to visit this beautiful city and comment down if you like to know about any other city or country.